Even though my last day is still a month away, I feel sad. I made a tribute photo collage today and I was teary-eyed. I can't believe that I was able to leave this group that I had worked with for the past 2 and half years, my longest employment ever. I was thinking of retracting my resignation, but then it's already at HR, plus the fact that there is another plan ahead, to settle with my man.

I just hope that I won't regret this thing that I did. I hope that the next company I would be working with would be as cool and fun as these people.

I would really miss my Emerson family.

told my mom that am going to sleep early coz of a headache, but look what am doing now... #pasaway!

Insensitivity Has No Place On Earth

After the earthquakes then tsunami and recently nuclear scare, all that Japan needs now is support and prayers. This was the summary of the page that I had shared to my Facebook friends yesterday. A moment of silence to be offered this coming Saturday. Then out of nowhere, somebody sent me this message (not the exact words, but I just took out his main thoughts):

"Hi! I received your message and yes, you have a point. Japan needs our prayer, but come to think of it, this could be God's way of getting back on them after all that happened when they invaded us. Do not forget the fact that many Filipinos were killed, many women were raped and many establishments were ruined. Whatever happened to them, they deserve it."

After reading it, there was only one thing that came to my mind, this is the perfect example of INSENSITIVITY. I have not yet forgotten those three years under the Japanese military. I have not yet forgotten the stories told to me by my grandfather, on how they shelter themselves inside improvised caves just to survive. I have not forgotten all those stories of comfort women (and even comfort gays) that had been part of our media in the past years. Those accounts are rooted in my mind. But then, this is not the time to speak ill of our brothers. What happened to them is truly devastating, and what's worst, thousands were killed, and among those victims are people of foreign blood, and Japanese people who had also condemned the acts of their ancestors during the WWII. Today, we are all equal. Japan needs our help, and eventhough we were saved from the wrath of Mother Earth last week, we are not completely saved. I wonder how he would react if Philippines was the one hit by that killer quake and tsunami.

God taught us to be forgiving. He said that if our brother had wronged us, forgive him not only seven times, but forgive him seventy times seven. It means that we must be forgiving, just like how He forgave us by dying on the cross. What Japanese military had done to our ancestors in the past can be compared to flogging and betrayal of Jesus Christ. But at the end, just before He died on the cross, He called upon the Father in Heaven to forgive us, for we do not know what we are doing. A perfect example of forgiveness. If Jesus Christ, the Son of God, was able to forgive those who have wronged Him, flogged Him and nailed Him on the cross, who are we not to forgive our Japanese brothers? I still believe that whatever happened last week was God's way of shaking us, on calling us to be united and forgive our brothers. The world had gone crazy in the past, nations rose up against nations, He brought these catastrophe so nations would once again stand hand in hand and restore peace among humanity.

His reaction to my message was completely uncalled for and inhumane. Insensitivity has no room on this earth at this time of sadness. I just wish that he would learn to be a better person too, his richness could never ever bring him into Heaven. He must learn how to reach out to the people outside the fence of his house. I feel sad that he sent his nephews in a Catholic school but he does not know how to properly act as a Catholic Christian.

As my dear alma mater always reminds us (and ironically, his nephews are also studying there now, and I bet he read these lines on various posters and trash bins in the campus when he brings the kids to the school), I hope and pray that he too, will learn to live up on these words:


BE THE SHARER'S OF GOD'S LOVE! 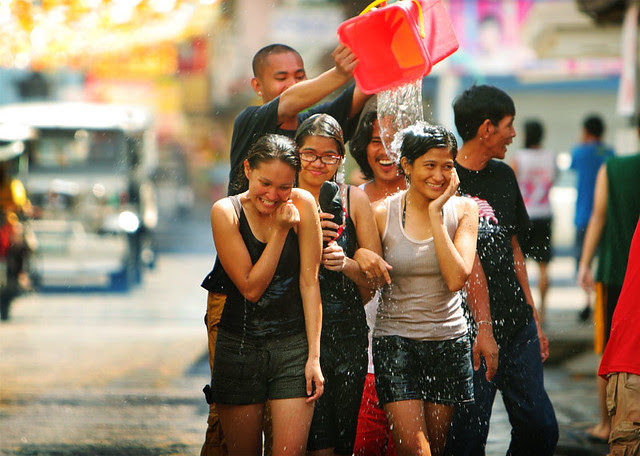 ...the wet and wild streets of Lipa City. I forgot that it is "buling buling" day, thanks for the reminder from my best friend. But eventhough I know that it is not safe for me to go out, I still went out because I needed to withdraw for my transportation allowance tomorrow! What I did was, I wore my regular fashion to the mall, yes, the fashion I normally wear only inside the house. I readied myself for the worst, knowing that the youth (well, even the adults) of Province of Batangas are all addicted to this event. Thank God these guys felt pity on me and did not threw water on me while walking my way to the jeepney stop (but these guys are on stand by along the terraces of the houses I passed by and also at the barangay hall, pails of water seated beside them). So there, I survived the Buling Buling 2011!

What or where did this originated from? I honestly do not know. All I know is, this happens every Sunday before Ash Wednesday. I would like to think that this is in relation to some Catholic beliefs. I always think that this is how we reenact the baptism of Christ. If Germany has this so-called "Fasching" or "Karneval", where people parades on various costumes on a Monday before the Ash Wednesday, we do have this buling buling that we do on a Sunday before the Ash Wednesday. I remember in my former high school, our Fair Event always occur a week before Ash Wednesday, hence, the last day had always been our buling buling celebration, regardless on what day it fell. Funny how our school administration prepares for this last day event, stalls start to sell water guns and water balloons, and then the drums of water suddenly becomes available in the middle of the basketball court and volleyball court. Water hoses are all set on each faucets on all lavatory all over the campus. Then, at exactly 1pm, water fight is everywhere. I always go home wet. No one in our school went home dry. It was fun! What was even funnier was, we also throw water on our service vans and service drivers and even on guest students from other schools. We wanted to share with them the fun and to literally make all people who step onto our school grounds wet.

I may have survived this event today, but honestly, I miss getting wet by the street. I miss those times at Canossa Academy Lipa City wherein I went home soaking wet, literally. I missed being a victim of all these water fight. And with this temperature of around 34 degrees Celsius, I really wanted to get that big splash of water under the scorching sun.

*credit to the owner of the photo, Mr. John Javellana. The photo is actually from Balayan Fiesta, I cannot find a photo for buling-buling event, but they are just the same, water fight along the streets, minus the lechon parade which only happens during Balayan Fiesta.
Posted by Cye at 7:15 AM 5 comments:

March at last, but then, I would not be a March bride due to some unexpected things. I am going to be a May bride instead. It's okay, at least I am just a few steps away from getting to Germany.

These are some stuffs I need to attend to this March:
That's it for now, and maybe I will add more next time. I need to get out of the house and report to the office now...